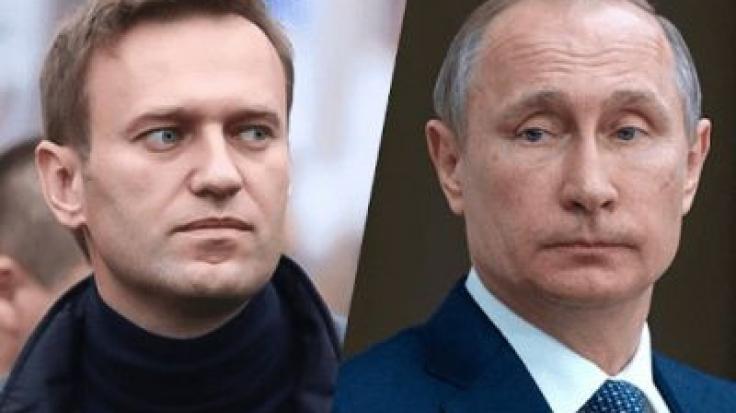 This is truly a new global blockbuster, in which Navalny plays the main role – the one of "Maksim Ustinov", the made-up assistant to the chair Russian Security Council's chief, Mr Patrushev.

It is becoming more difficult for Putin to deliver excuses about Navalny's poisoning. Russian opposition's Alexei Navalny, a novichok attack survivor, called one of the alleged poisoners, posing as an assistant to the ex-head of the FSB and now Security Council Secretary Nikolai Patrushev.  His interlocutor was one of the members of the group, which Bellingcat and The Insider's joint probe says had been closely working on Navalny. Konstantin Kudryavtsev – that's his name – has revealed all the details of the group's mission, which he considered quite successfully completed, and also admitted that he had cleaned the politician's clothes from traces of poison applied to his underpants. Yet another shameful failure of the Russian special services…

At his final annual press conference, Vladimir Putin admitted that security operatives had indeed been following Navalny, but not in order to take him down. A classic argument of a defense lawyer: "Go look for a real killer, my guy is a witness." Therefore, detectives usually reserve the sweetest part of the evidence for the end and hold it until they first hear all of the suspect's excuses. And only then do they strike them with a blow of massive evidence which therefore exposes the perpetrator even better.

Investigators with Bellingcat, The Insider, and the Anti-Corruption Foundation have done exactly the same. They first laid out half of the evidence and allowed the Kremlin to ultimately get confused in own excuses. And then, once the Russian security services got deep into the trap, they laid out an enchanting, surreal conversation between Navalny and Konstantin Kudryavtsev, who was duped into confessions that devastated all of the previous Kremlin explanations.

This is truly a new global blockbuster, in which Navalny plays the main role – the one of "Maksim Ustinov", the made-up assistant to the chair Russian Security Council's chief, Mr Patrushev.

Interestingly, out of the eight people Navalny reached out to, almost all did pick up the phone but hang up quickly upon hearing the topic. Almost all, except one – Konstantin Borisovich Kudryavtsev, a military chemist with the FSB Institute of Forensic Science, who previously worked at the biological security research center of the Ministry of Defense and the Military Academy of Radiation, Chemical and Biological Defense. In the end, the man spoke for 45 minutes with someone he had been monitoring for the past three years and never recognized his voice – apparently fearing wrath of his superiors. And he just bluntly told him about everything: about the blue underpants, about their inside part, and, yes, about the mission's failure, and, yes, about how sorry he was.

But it's not even the cherry on the cake of this blockbuster. The most amazing thing is that the FSB chiefs and the country's leadership were never briefed on the looming shocker premiere! The Russian state system has gotten so rotten that signals just fail to pass through to top consumers. Either Kudryavtsev never dared confess to his superiors, how badly he had been duped, or, as usual, told some half-truth... while the higher offices heard only half of that initial half. As a result, Putin was either oblivious of the prank call or told there was nothing to be concerned about. This once again clearly illustrates the quality of information that the Kremlin chief ultimately gets to hear after it passes all bureaucratic circles. This leaves Putin living in his own world no one else understands.

After all, having learned about the infamous call, the system could have done at least something, inflicting at least some kind of preemptive media blow, as is customary for the Russian intelligence. But the negative selection in the intelligence community has already reached its absolute lows, it appears. Degradation of the entire law enforcement and security system has once again come into the limelight.

The entire investigation by Bellingcat and The Insider appeared including because everything is sold in the system of Russian security agencies – secret databases, too. It is no secret that the market for stolen personal data has been flourishing in Russia. Its annual turnover stands at about $50.7 million. If you bribe, say, a police officer with access to databases, you can obtain your target's travel logs for some $230-380. Billing data are also quiet cheap. Usually, the offer covers call logs, sms texts, and social network activity for the  past six months. The price depends on the mobile operator ($1,200 max). Grey market also provides data on residence address, license plates, etc.

Russian journalists with the Daily Storm Group made several test purchases on the database market. They found that information on the FSB operatives who attempted to assassinate Navalny cost somewhere around $12,000.

But, of course, the biggest blunder was precisely the fact that the group working on Navalny made a plethora of mistakes. Imagine this: the FSB created a special department just to monitor the opposition figure's trips and do surveillance – for years. The decayed Russian bureaucracy will never miss the opportunity to employ eight people for a job a single person would be able to do just fine. And, of course, the machine will never miss the opportunity to siphon off a million or two from a budget that could initially be capped at a hundred thousand.

The same applies to the chosen tool – the novichok nerve agent. Why, it would seem, one would need such an elaborate, sophisticated poison, which, if discovered, just cries "government-sponsored mission"? The answer is simple: it's not novichok for Navalny, but Navalny for novichok. An entire research facility was set up to justify the project, along with multiple departments, offices, and divisions with numerous chemists and operatives. They all need, in turn, to justify their own existence and unlimited funding.

Well, the latest justification effort was a bit awkward, to say the least – sometimes it feels only Russians could screw up so bad. As Mr Kudryavtsev put it: "They told me to work on the underpants, on the inside part…" Imagine how this gem is being amplified at the Security Council and other Kremlin offices and dachas!

The complete failure of Putin's operation is also evidenced by a bill hastily passed the day after Navalny posted the exposing video with his prank call, banning publication of any information concerning private life of both government officials and security operatives, as well as a bill allowing to block YouTube altogether. The blocking could be initiated by the Prosecutor General's Office in accord with the Foreign Ministry. Resources that will be spotted "violating" new legislation will be put in a special list of sites breaching "fundamental human rights and freedoms."

So, the new exciting blockbuster has dug so deep into the abyss of Russian security agencies' failures that it seems the point of no return has already been passed. And this is just a couple of episodes, while the rest of the series is yet to come. And the audience is just craving to see the plot unfold, especially since the authors, actors, and director have long been known to everyone.